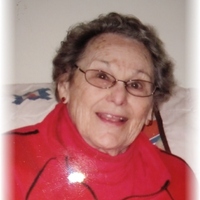 Catherine Ann Holsheiser passed from this life on September 16, 2020 at The King’s Daughter’s Home in Mexico, MO.

Catherine Ann Heitmeyer was born to Arthur and Virginia Carter Heitmeyer on 10 April, 1920 at the family home near Granville, Missouri, forth of nine children. She graduated from Holiday High School in 1938. From 1938- 1941 she attended Kirksville Teachers’ College. On July 4, 1941 she married William Harold Holsheiser in a triple wedding service in the rose garden at her Pastor’s home in Holiday, Missouri. While her spouse served in World War II, Catherine Ann taught at Evans School. Throughout her life, she greatly enjoyed being greeted by former students.

After the war, Harold and Catherine Ann settles in Thompson, Missouri, where they ran Holsheiser’s General Store from 1950 – 1981. During this time, Catherine Ann was active in Missouri Extension Club, serving in several offices including President, a local bridge club, and Lion’s Club Auxiliary. She served over twenty years in leader capacities for Audrain County 4-H and Sims Happy Helpers 4-AH Club. She faithfully attended Liberty Christian Church in Thompson. Occasionally, she was a substitute teacher in area rural schools. Her favorite things were sewing, cooking, and frequent entertaining.

During her later years, Catherine Ann stayed active socially. She was a member of the “Saturday Morning Breakfast Club,” continued playing bridge, volunteered at the Veteran’s Home in Mexico, and turned her creativity to ceramics, quilting, and cross-stitching.

The family wishes to thank Darius Love and the King’s Daughters Home staff for their kind, compassionate, excellent care during the last few years. Any Memorial donations may be made to The King’s Daughter’s Home for employee fund or general funds, care of Mr. Darius Love.

A Memorial Service will be held at 11:00 a.m., Saturday, October 3, 2020 at the Bethel Cemetery in Holliday, Missouri. Family and friends are invited to a celebration of life wake hosted at Rick and Kathy Heitmeyer’s home in Paris, Missouri with a Fish Fry following the service.

To send a flower arrangement to the family of Catherine Ann Holsheiser, please click here to visit our Sympathy Store.