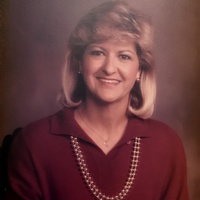 She was preceded by her parents Ward Finley and Ruby Olena Deline; brothers, Franklin Deline, Gary Deline, and Ronald Deline.

Born January 18, 1944, in Wheeling, West Virginia, Carol was a 1962 graduate of Central High School in Aberdeen, South Dakota, and received a Bachelor of Fine Arts degree in Digital Art and Design in 1998 from Henderson State University.

She met Jerry in Dallas, Texas while she was a stewardess for Braniff Airways while he was a Captain in the United States Army as a Flight Instructor based at Fort Wolters in Mineral Wells, Texas. They were married on November 5, 1966 at Christ the King Church in Dallas, Texas.

She was a fun-loving and deeply devoted Grammy to her seven grandchildren, which will leave an unforgettable legacy for generations. She had a passion for travel with five trips to Israel, two trips to Russia, two trips to Ethiopia, a tour of Ireland for her 50th wedding anniversary, and a trip to London.

She poured her heart and soul into her family and friends with a loving and gracious heart. Her life’s priority was to live to know Jesus Christ and make His Name known. She was influential in numerous peoples’ lives in their decision to accept Jesus as their Savior.

We are all honored and thankful to God for giving this world seventy-four years with this absolutely incredible woman.

Memorial services for Mrs. Carol MacNamara will be held at 11:00 A.M., Saturday, July 7, 2018, in the First Baptist Church of De Queen, with Bro. Josh Herweck officiating. Cremation arrangements are under the direction of Chandler Funeral Home, De Queen. You may send an online sympathy message at www.chandlerfuneral.com.

Should friends desire, contributions may be sent to Feed the Children, https://donate.feedthechildren.org/donation/f6774089/.