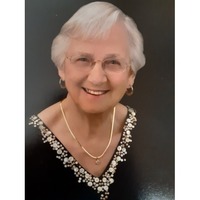 Carol was born and raised in Hastings, MN. In high school she worked at the Corner Drug Store in the soda fountain and was homecoming queen. In 1944 during WWII she and five girlfriends went to Washington D.C. where she worked at the U. S. Treasury’s Procurement Department as a clerk/steno-typist. Following that, Carol worked at Selman Air Force Base, Monroe, LA and was there when V-J Day (Victory over Japan) was declared on August, 1945. When she moved back to Minnesota, she got a job at the Army Recruiting Office in Minneapolis which she represented as a princess in the 1947 St. Paul Winter Carnival.

At a Medicine Lake Mission Farms Conference she committed her life and heart to Jesus. She was a member of Fourth Baptist Church in Minneapolis and met her future husband, James Hopf, at the Hospitality House in Minneapolis in October 1947. Two weeks later he asked her to marry him. They were married November 23, 1949 until Jim died in 1999.

Carol and Jim had a gift of hospitality and developed life-long friends wherever they lived – Minneapolis, Hutchinson, Eau Claire, WI, Burnsville, Green Bay, WI and Hastings. In Green Bay she became an avid Packers fan. Carol was a professional homemaker, a mother of five and enjoyed traveling with Jim and her kids. She loved playing games with family and friends, doing puzzles and hosting get-togethers. One of the first members of Berean Baptist Church in Burnsville, she was a deaconess, was active in Sunday School, faithfully served in the nursery and with women’s ministries, choir and many other capacities. She was active and still driving until two months before her passing. The last two years she lived at Presbyterian Homes’ Orchard Path Community in Apple Valley where she made many new, dear friends. She will be remembered for her warmth, faith, sense of adventure, selflessness and devotion to her family.