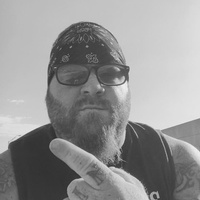 Brandon was born August 18, 1976 to John F. and Betty (Vaughan) Husband. He grew up in southwest Kansas, living in Meade, Montezuma, and Fowler, and graduated from Fowler High School in 1995. In 1998, he joined the Army, completing basic training in Ft. Knox, Kentucky. He completed his advanced training in light-wheeled vehicle mechanics at Ft. Jackson, South Carolina, and earned his airborne wings at Ft. Benning, Georgia. After airborne training, he was assigned as a paratrooper in the 82ndAirborne Division, stationed in Ft. Bragg, North Carolina.

Brandon enjoyed riding his bike and spending time with friends and family. According to his friends, he liked his music and he liked it loud! Despite his gruff exterior, he had a huge heart.

Brandon returned to Fowler in 2015 and married Lynn (Krisle) in December, 2016.  She also lost her life in the accident.

He was preceded in death by his father, John F. Husband in September of 1999.

He is survived by one daughter, Carrie Husband of Tonganoxie, KS, three step-children, Kadyn Weber of Woodward, Oklahoma, Kenyan Weber, & Kambrey Weber of Fowler, his mother, Betty Husband of Montezuma, and sister, Jan Husband-Granados of Fowler, and numerous nieces and nephews.