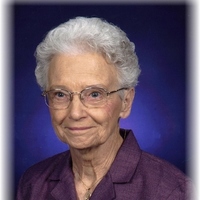 Betty and Charles farmed near Victor until 1959 when they moved to Albuquerque, New Mexico. While in Albuquerque, they set to the task of making a life for themselves and two daughters. Betty worked as a cafeteria food manager for the school lunch program, hospital food service supervisor, and finally as safety inspector at Lovelace Medical Center until her retirement in 1986. Following retirement, Betty returned to Paris. Since her return, Aunt “B” as she came to be known kept busy all the time. Some knew her as a good neighbor who could whip up a meal in a flash including her famous coconut cream pie or the lady who walked two miles in a blink of an eye. Aunt “B” truly enjoyed dancing and spent many an hour on the dance floor each week. She loved to crochet and give her handiwork away as gifts. When she wanted to be a farmer again, she spent time with her sister and brother-in-law, June and Dale Morgan, on their farm. She enjoyed trips to visit her daughters’ families, especially the grandchildren, who lived out of state. Betty will be remembered for her energy, friendliness and generous spirit.

Funeral services will be held on Wednesday, December 18, 2019 at 2:00 p.m. at the Agnew Funeral home in Paris. A visitation will be held prior to the funeral Starting 12:30 p.m. until time of service on Wednesday. Burial will be at Walnut Grove Cemetery in Paris.

Memorials are suggested in lieu of flowers to Santa Fe Christian Church, Santa Fe, Missouri, where Betty Weaver was one of the longest and oldest living members.