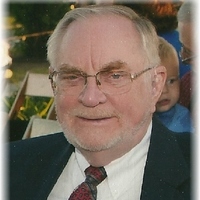 Barney Jackson (“Jack”) Nichols Jr., of Saint Louis and Paris, Missouri, passed away on January 24, 2020, while in hospice care at the BJC Christian Hospital in Saint Louis.

Jack was born on January 19, 1932, in Saint Louis, the first child of Barney J. and Martha E. (Clenney) Nichols. He was still an infant when the family returned to southwest Georgia, where Barney Sr. bought a farm and a mercantile store in Carnegie. Jack grew up there. He helped on the farm and worked in the family store. He learned to milk a cow, plow a mule, shake and stack peanuts, hoe and pick cotton, and drive a tractor. Being the oldest child, he had to build the fire each morning in the family’s wood burning kitchen stove. It was up to his younger brother Julian to be sure the wood box stayed full.

Jack went to high school in nearby Edison, Georgia, where he played basketball, graduating in 1949. In his free time he often hunted doves and quail. He then attended North Georgia College & State University --- at that time a tough military school --- where he completed ROTC training to become a 2nd Lieutenant and received a BS degree in Physics in 1953.

After taking some graduate courses at Florida State University and Georgia Tech, Jack joined the US Army. He was quickly selected to be a member of the Fort Bragg rifle team. He spent much of his military career participating in competitions with some of the Army's best shooters from across the country.

In 1956, as a 1st Lieutenant, Jack completed his full-time military service and went to work for Emerson Electric in Saint Louis. There he met his future wife Peggy, the daughter of Ann and Henry Curtright of Paris, and a graduate of the Washington University School of Nursing. He and Peggy were married on May 2, 1959, at the Paris Christian Church.

In 1964 Jack was hired by Saint Louis University, during the formation of their Information Technology Services division. He worked there until his retirement in 1994. In 1988 he and Peggy bought and began restoration of the Colburn house in Paris, to be their primary residence.

Jack was an avid bird hunter and fisherman. He loved an outdoor life. He thoroughly enjoyed and treasured the memories of his many duck and pheasant hunting trips with his friends and fellow hunters in Missouri, Iowa, and Nebraska. He also cherished his annual trips with his fishing buddies to Bennet Springs, Missouri. He would launch his boat in Mark Twain Lake and fish there whenever he could. He spent most of his retirement in Paris, where he had good neighbors and many good times, especially when he was with his pet schnauzers.

Jack was preceded in death by his parents, a sister Ann Nichols, his nephew Jason Nichols, in-laws David and Mary Curtright, and others in his parents’ extended families.

He is survived by his wife Peggy, by his brother and Julian’s wife Annette and their children Judd & Tasha, by in-laws Maurice Nichols, Greg Parker, Dan & Carol Curtright, and Thom & Jo Ann Curtright, and by his mother’s 98 year-old sister Norma Davis, as well as by many wonderful nieces, nephews, cousins, and close friends.

Funeral services will be held at 2pm on Friday, January 31st, at the Agnew Funeral Home, with visitation from noon until time of the service.

The family requests that memorials be given in Jack’s name to the Paris Senior Center, to the Missouri Humane Society, or to a charity of your choice.