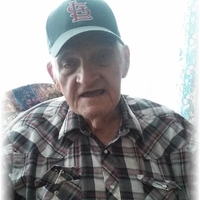 He was born August 12, 1931 in Goss, Missouri, the son of Arthur Hayden and Bessie Marie (Young) Hawkins. On September 11, 1959, he married Virginia (Howald) Baker and she preceded him in death on July 7, 2011. They were married for 52 years. He is survived by two daughters, Melanie Webb of Paris and Saunceria Neale of Mexico; six grandchildren, Aron Rowe and Darnett Carr, Ashley and Quinten Ashenfelter, Tyler Webb, Andrew Rowe, Kyle and Morgan Neale and Danica and Eric Johnson; and thirteen great-grandchildren. He was preceded in death by his parents; three sisters; Virginia, Bettie and Thelma, and a son-in-law, Donnie Neale.

In his younger years, he drove race cars and played pool. He joined the United States Air Force during the Korean War, where he served from 1951-1955. During this time of war, while pulling a tank wagon loaded with fuel, it was shot at and blew up. Sonny was pulled out of the fire and spent six months in France in a hospital.

He was an avid fan of NASCAR and the St. Louis Cardinals. Sonny liked to talk about all the vehicles he owned in his lifetime. In the early years he enjoyed playing cards with his Monday night poker friends.

Graveside services will be held at 4 p.m. on Thursday at Walnut Grove Cemetery with Reverend Larry Thomas officiating.

To send a flower arrangement to the family of Arthur (Sonny) Hawkins, please click here to visit our Sympathy Store.