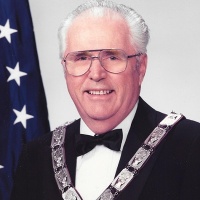 Beloved husband and father, Anthony Robin Adams, passed away June 9, 2019, at age 90. Robin to family, Tony to colleagues and friends, was born September 25, 1928, in Glendive, Montana. He and his twin brother were the last of eight children born to Robert and Helen (Wodke) Adams. In his early teens, the family relocated to Glendale, California. Tony graduated Burbank High School where he excelled in tennis.

Shortly after graduation, he enlisted in the United States Air Force. His enlistment sent him to every region in the U.S. He also served in Europe and Southeast Asia. In June of 1954, while stationed at Barksdale AFB, Louisiana, he met and married Callie Loretta Parker of Minden. Upon retirement as a Master Sergeant in 1968, the family settled in Lompoc where he was employed at Grefco until 1992. After his second retirement, he and Loretta enjoyed traveling the western United States with their fifth wheel trailer.  An active member of the Lompoc Elks Lodge, he served on the board of trustees and was the leader of the Sunday brunch crew, “A Team.”

Tony is survived by his wife of 65 years, Loretta, sons Gary of San Diego County and Scott of Lompoc, granddaughters Kelsey Corn of Azusa, California, Jessica Baird and his only remaining sibling, Betty Allen of Newhall, California. Tony is preceded in death by his son Douglas, parents and siblings.