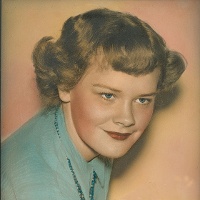 Alta began elementary school in Snyder, Oklahoma. At 7 years of age, her family moved to Coolidge, Arizona, where she completed grade school. At that time, her family moved to Blackfoot, Idaho, where she completed her first and only year in high school. While in her freshman year of high school, she competed in girls’ basketball, volleyball, athletic club and home economics.

Alta was married on November 3, 1951, to Gale Walton in Laramie, Wyoming. The young couple moved state to state following construction trades until arriving in Lompoc, CA, in 1959.

Pursuing her love for sports, Alta played city league softball and became an accomplished bowler. Many people remember Alta as a school bus driver for the Lompoc Unified School District, where she retired in 1984, after 18 years in service. Alta was also remembered by some from the years she worked at the Lompoc Walmart.

Anyone who knew Alta will say she loved to talk and laugh, and she was always ready for a good joke.

A private inurnment will take place at Lompoc Evergreen Cemetery.

In Lieu of flowers, donations can be made to Central Coast Hospice, 253 Granada Drive, Suite D, San Luis Obispo, California, 93401.