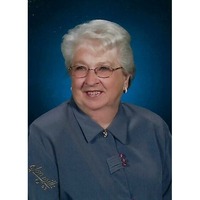 Gladyce Evellyn Johnson, age 87 of Apple Valley, passed away on September 22, 2020. Gladyce was born on January 11, 1933 in Barrett, MN and moved to Elbow Lake, MN when she was 16. She graduated from Elbow Lake High School in 1950. She married in 1954 at the First Lutheran Church in Elbow Lake to Jerald S. Cordahl, and they had 4 children. During this time, they moved to Minneapolis. They were divorced in 1976. Gladyce worked for Control Data/Seagate, while at Seagate she enrolled in Eden Prairie Votech and became a Technician and retired on January 31, 1995 after 28 years.

She enjoyed dancing, reading, quilting, crocheting baby afghans for hospitals and friends, and prayer shawls for those in need. She also loved quilting and knitting with her church group. She was the treasurer at the Apple Valley Senior Center as well as receiving volunteer of the year award in 2000.

Gladyce married Lyman P. Johnson in 1983. She and Lyman enjoyed traveling together and visiting family and friends. She has been a member of the Rosemount Methodist Church/The Wells since 1996.

Funeral Service will be held 10AM Tuesday, September 29, 2020 at the The Well Church, 14770 Canada Ave. West Rosemount, with visitation starting at 9 AM. Interment at 2:30 PM, Union Cemetery, Elbow Lake, MN.