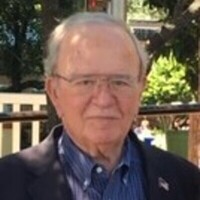 Bill was born September 12, 1936 in Alma, Michigan.  He attended public schools in Alma and Midland Michigan High School.  He graduated from Central Michigan University in 1958 with a Bachelor’s Degree in Accounting and a Commission in the United States Army.  Bill entered the Army in February, 1959 and married Mary Sue Rogers in 1960.  They had 38 years and 4 children together.  He served twenty-one years in the Army, of which three years were in Vietnam as an Infantry Officer.  His military decorations include two Bronze Stars, three Meritorious Service Medals, four Air Medals, including one V, the Army Commendation Medal, and Combat Infantryman’s Badge.  He retired as a Lieutenant Colonel in October 1979.  While in the Army, he earned Master’s Degrees in Management and Accounting.

In November of 1979, Bill joined USPA & IRA (now First Command Financial Services) as a salesman.  He eventually achieved the positions of Chief Financial Officer and Executive Committee member before his retirement in December 1996.

After the death of his beloved wife, Mary Sue, Bill married Ellen Renaud Pulliam in May, 2000.