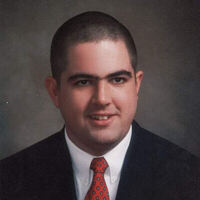 Brian Matthew Templeton, 40, graduated from his Earthly confines to his Heavenly reward on Sept. 17, 2020 in Azle, TX.  He died peacefully in his sleep after a day of joy spent with his parents and nephew visiting the family’s hunting camp near Loving, TX.

Graveside services are scheduled for 2 p.m. Monday, Sept. 21, at Rockwall Memorial Cemetery in Rockwell, TX., where other family members are buried. A memorial service will be scheduled later in Midland, TX., where Brian spent most of his life. Brian’s former pastor Dr. Tim Walker of Northlake, TX is officiating.

Brian was born on November 9, 1979 in Garland, TX. He attended school there until his  kindergarten year when the family moved to Midland in 1986.

Early in his life, Brian was diagnosed as a high-functioning, intellectually-disabled person with emotional highs and lows. Under the special care of Dr. Eric Olson in Midland and a regimen of medications, Brian functioned at a high level of social ability and friendliness. His unique capabilities ranged from being able to tell time, but not count money. He read well, enjoying the morning comics (especially Beetle Bailey and Blondie) as Dad read the news pages. He also exercised an amazing vocabulary and carried on nonstop conversations. He also mimicked Popeye a lot and always got his pizza for Friday suppers.

Interestingly, Brian was apolitical, but always got upset at anything on TV when President Trump was criticized. And, no, it was not because his parent brainwashed him; he was alert enough to think independently.

His most notable trait was an awesome memory as he never forgot a name and could recall years later what you ate, wore and did on a specific day in the past. It could sometimes backfire as he remembered the bad with the good. We constantly worked on the rule of never discussing “death, divorce, sex, or taxes.”

He made everyone around him a better person with his infectious laugh (from comics to PBS programs), name recall, handshakes (fist bumps in the Covid-19 age), and his “glad-to-meet-you” greetings. He had special friends at convenience stores he and his father often visited for treats on Tuesdays and Thursdays.

Brian most enjoyed going on family trips, simply enjoying his CDs of Willie Nelson, John Denver and Kenny Rogers, watching the scenery, talking in the car, sleeping at motels, and eating at restaurants. Many of these were guy trips with Dad to any close-by towns. He was like a compass with a natural sense of east, west, north, or south, often telling his Dad he was going the wrong way. Movies were a favorite of Brian’s as he could quote whole dialogue sections such as “You can’t handle the truth” from A Few Good Men.

For forty years, Brian made his brother, Dad, and Mom better persons. All of us liked going to the Texas State Fair to see Brian’s buddy Big Tex every year, but he just missed it for this year.

Brian was most importantly known for his belief in Jesus Christ as he would often sing “Victory in Jesus,” “Jesus, Name Above All Names” and other songs learned at Emmaus meetings (He went on a Chrysalis in 1997) and his beloved Spirit Wind Methodist Choir tours. He had a sense of music that led him to run through all vocal parts of a song from his keen memory, including all verses and instrumental segments.

He had a special bond with his brother Mark, who was always protecting him and mentoring him. They truly loved each other.

Preceding him in death were his beloved grandparents, Chuck and Ann Templeton and C.D. “Duane” Firmin; his uncles, Phil Firmin and John Templeton; and his aunt, Donna Alexander Templeton.

He is survived by his parents, Bob and Lois Templeton of Azle, TX,; his brother, Mark David Templeton, wife, Candace and their son, Trevor Nathan of Lewisville, TX; his grandmother, Eileen Firmin of Mesquite, TX. (formerly of Perryton, TX.); his uncle, Charles Templeton of Odessa, TX.; his aunt, Allie Templeton of Sugar Land, TX.; his uncle, Tom Templeton and his children, Sharon and Keith of Washington state; and his uncle, Mike Firmin, his wife, Evasue and their daughter, Jennifer Firmin of Garland, TX.

The family thanks Dr. Eric Olson and Dr. Cheryl Vallie of Midland for their special care of Brian, MARC Inc. of Midland and Daybreak Care Services of Fort Worth/Tarrant County for their care over the years, the Midland Hi Sky Emmaus Community of Midland, and all former teachers and other caregivers.

The family requests any tributes to Brian be directed toward MARC Inc. of Midland, the Spirit Wind Choir, or any mental health care organization of your choice.