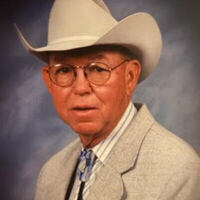 Virgil was born August 28, 1935 in Floydada, son of Russell Everett and Jessie Mae Carter Warren.  He was raised in Floydada, where he graduated from high school.  Virgil was a farmer in Floydada but later moved to Amarillo where he went to work for Cisco, retiring after many years.  Virgil went to school in Amarillo in the early 60’s to become an Auctioneer and this was his passion for over 65 years.

Virgil was a member of First Baptist Church of Dennis.  He was very community minded and volunteered and contributed a great deal.  Virgil was a kind hearted man and would do anything to help anyone.  He was a straight shooter.  If asked, he would tell you exactly what he thought.

Virgil was preceded in death by his parents; and brother, Dennis Warren.

To send a flower arrangement to the family of Virgil Edwin Warren, please click here to visit our Sympathy Store.