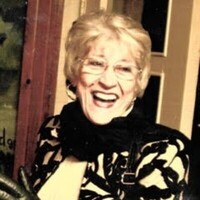 Peggy was born November 28, 1933 in Cape Fair, Missouri to Gene and Mary Jo Henson. She was the first born of seven siblings in the Henson family. Peggy graduated from Galena High School in 1951 and attended the University of Missouri.  After college, she moved to Tulsa with her best friend, Bunny, in search of her future.

While working as a ticket agent with American Airlines in Tulsa, she would meet a co-worker and the love of her life, Roy E. Myrick.  They were married in 1957.  After a few years in Tulsa, Roy was hired by General Dynamics and they relocated to Fort Worth to start their family.  While in Fort Worth, they had three sons: Steven Sloan (1963), Stuart Spencer (1965) and Shannon Slade (1969).  After outgrowing their home in Fort Worth, they moved to Lake Weatherford for a few years.  The family moved to St. Louis in 1974 where Peggy enjoyed life as a devoted wife, proud homemaker, and an avid tennis player. As her children grew older and she found she had more time to herself, she put it to good use and decided to obtain her real estate license.

After moving back to Weatherford in 1977, she had two passions (in no particular order):  mother of three boys and real estate agent extraordinaire.  Peggy would eventually serve as president of the local Board of Realtors and on numerous committees.  She was well known for her big personality, bright smile, and fervent pride in the local real estate community.

Eventually, she would become owner/broker of Peggy Myrick Real Estate on South Main St. In 1986, Roy retired to support his wife in her business.  In 2016, Peggy was recognized by the State of Texas for 50 years in real estate and enjoyed many privileges associated with that.  She begrudgingly retired from real estate with Century 21-Judge Fite in Weatherford in May 2020.

If it was 9 a.m. on Friday, you could rest assured, she was in Kathy Evans’ salon chair, with Kathy performing hair magic and making Peggy “presentable” to the general public.

Peggy was an active member and devoted worshipper at Grace First Presbyterian in Weatherford from 1977 until her passing.

After Roy’s passing in 2004, Peggy forged ahead with her fierce determination to enjoy an exciting final chapter of life.  Peggy lived independently in her home until she passed quietly on September 8th.

Peggy was preceded in death by her husband, Roy; her parents, Gene and Mary Jo Henson; brothers, R.C. and Butch Henson; and a sister, Linda Lou Crawford.

To send a flower arrangement to the family of Peggy Jean Myrick, please click here to visit our Sympathy Store.