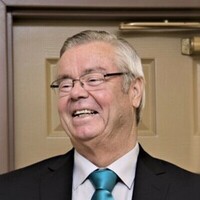 Roger DuWayne Larson, age 66, of Farmington, MN passed away at his home on Saturday, September 5th, surrounded by his loving family. Roger was born in Viroqua, WI on April 16, 1954. He was the third of five sons born to James and Doris Larson of rural Westby, WI. Roger was preceded in death by his parents, older brother David, and infant nephew John.

Growing up on a dairy farm served as the foundation for Roger to continue his passion for working in the dairy industry. Following his graduation from UW-River Falls, he worked for Midland Cooperative that later became Land O’ Lakes where he spent 33 years in numerous roles in the dairy feed division helping dairy farmers. While working at Land O’ Lakes, he earned his MBA from St. Thomas University. Upon retirement from Land O’ Lakes, he continued his career in the livestock feed business spending nine years at Quality Liquid Feeds (QLF) in Dodgeville, WI.

Roger never forgot his roots and made it a priority to annually attend the Westby Ski Jump, Syttendi Mai Festival, and the Vernon County Fair. Roger’s greatest joy was his family who cherished the love he showed them. Roger enjoyed yearly family trips to the North Shore, and attending Packers, Twins and Wild games.

Interment will be at a future date at the Country Coon Prairie Cemetery in Westby, WI.