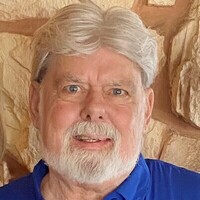 After a hard-fought battle with an aggressive cancer, Samuel Ray McClure, 72, passed away peacefully in his home in Weatherford on Tuesday, September 1, 2020.

Sam was born May 8, 1948 in Fort Worth to Charles Ray and Alma Marie Wood McClure. He grew up with two younger brothers, Nathan and Joel, and followed in the footsteps of his father in the ministry, graduating from Baptist Bible College in Springfield, MO.  After serving decades as a music and youth minister, Sam found a passion as a carpenter and woodworker. Sam was also very impassioned about llamas.  He raised, showed, and cared for his herd and others, as well as being an active member of the South Central Llama Association.

Sam was a fun-loving and joyful man who befriended everyone he met and always made a lasting impression. He had a fervent love for everything he did and those who engaged in his life were forever rewarded. He loved the Lord, his family, his friends, and life!

Sam is preceded in death by his parents.

Sam is survived by his wife, Marcille McClure; two sons, Tim and Jared McClure; and his grandchildren, Grace and Carter; as well as his two brothers, Nathan & Joel; daughter-in-law, Diana McClure; and five nephews and three nieces.

To send a flower arrangement to the family of Samuel Ray McClure, please click here to visit our Sympathy Store.