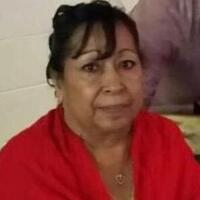 Gloria T. Vela, age 69, went home to be with the Lord on July 29th, 2020 at Valley Baptist Medical Center surrounded by her loving family.

Born December 4th, 1950 in Harlingen, Tx to Raul and Guadalupe Treto, she was raised in Harlingen, TX. She was a member of Queen Of Peace Catholic Church, Retired from Texas State Hospital-MHMR after 20 years working as a specials needs patient tech; A big time Dallas Cowboy fan. She also loved arts and crafts as well as fishing and the great outdoors.

Mass of Christian burial will be held on Thursday, August 13, 2020 at Queen of Peace Catholic Church at 1pm immediately followed by interment at Heavenly Grace Memorial Park Cemetery at 2pm in La Feria.

To send a flower arrangement to the family of Gloria T. Vela, please click here to visit our Sympathy Store.