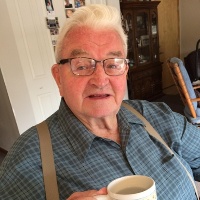 Douglas Ralph Kopp, age 83, of Whitehall, died on Monday, August 26, 2019 in the Gundersen Tri-County Care Center in Whitehall surrounded by his family.

Douglas was born on October 4, 1935 in Winona, MN to Ralph Ernest and Edna Lorraine (Johnson) Kopp. Douglas married Celina Goplin on June 26, 1954 in the Evangelical Lutheran Church in Pigeon Falls.

Douglas and Celina were dairy farmers for 43 years in Whitehall. They raised purebred Holstein cattle and showed them through 4-H and dairy shows. They were nominated as the Farm Family of the Year in 1974.

Additionally, Douglas worked as a heavy equipment operator for the pipeline, worked at the Packing Plant and Benchmark Electronics. Douglas enjoyed gardening and sharing the produce he grew, gambling and loved to play cards. He loved to surprise his daughters with horses and dogs. His favorite color was purple and he loved gladiolas. He enjoyed watching the Green Bay Packers and had an opinion about everything, whether you liked it or not.

Douglas was a bargain shopper and was always stocking up when there was a good deal, even if they didn’t need any at home. He loved Pepsi and you didn’t dare give him a Diet Pepsi because he wasn’t on a diet. Douglas entertained his grands and great-grands by pulling out and playing with his dentures. His wife, Celina, was the thing that he cherished the most in this world.

In addition to his parents, Douglas was preceded in death by his father and mother-in-law, Charles and Karen Goplin.

Memorial services will be held on Saturday, August 31, 20198 at 1:30 p.m. in Our Saviour’s Lutheran Church with burial in the Lincoln Cemetery both in Whitehall. Pastor Peter Jonas and Chaplain Karl Schearer will officiate.

Friends may call from noon until the time service at the church on Saturday.