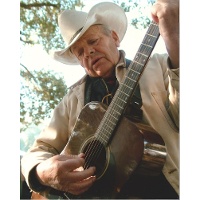 Richard Fred Grossini, 95, of Lompoc, passed away on July 31, 2019. Richard was born July 6, 1924, in Honda Canyon (Lompoc) to Vincent Grossini and Virginia (Grossi) Grossini, the fourth of eleven Children – Joe, Johnny, Eddie, Eileen, Virginia, Roy, Charles, Jimmy, Marianne and Teddy. He attended Lompoc schools, where he played on the high school football team that beat Santa Maria in 1941 breaking a 19-year losing streak for the Braves.

Richard served in the U.S. Navy during World War II as a Baker Third Class. Following his military service, he worked for the County of Santa Barbara, followed by thirty-three years as a heavy equipment operator at Johns Manville, retiring in 1985.

In August of 1946, he married Lucille Begg and they operated a cow-calf operation. He was a member of the Vaqueros – Badge #1, the Lompoc Elks Lodge, the Santa Barbara Cattlemen’s Association, the Model T Club and Lompoc Valley Riders. Richard enjoyed the outdoors, horseback riding, ocean fishing and hunting. A regular helper at local cattle branding, he was also known for his storytelling, yodeling, singing and guitar playing.

Known for his friendliness, he will be greatly missed by his family and the many friends he made over the years.

A Memorial mass will be held at 10:30 a.m. on Saturday, August 24, 2019, at La Purisima Catholic Church, Lompoc. A Celebration of Life is to follow at the Lompoc Elks Lodge. Please wear a red bandanna in remembrance of Richard.

Memorial contributions may be made to the Lompoc Valley Historical Society, P.O. Box 88, Lompoc, CA 93438 or to a charity of your choice.