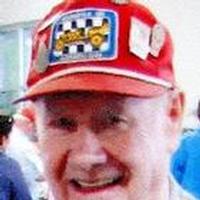 Went home to be with the Lord on Monday, January 6, 2014. The family would like to thank the wonderful caregivers at Harcourt Terrace Rehab and also American Village for the past seven months.

Bill was born in Chicago, Illinois on September 3, 1929, but lived most of his life in Indianapolis and was a ""Hoosier by choice,"" graduating high school in New Castle, Indiana in 1947. He then entered the Army and was discharged in 1950.

Bill was an avid golfer and sports fan, especially auto racing, where he announced many sprint and midget auto races for the United States Auto Club and even promoted races at Salem Speedway for three years. He was also an avid Pacers fan and spent 20 years on the Pacers Stats Crew, doing the P.A. announcing for the first nine years.

Bill worked in broadcasting for over 40 years, starting out in New Castle as a part-timer at WCTW, then West Virginia and Elkhart, before coming to Indy. He worked mainly in news at Channel 8, WIFE Radio, Channel 13, WIBC Radio and WXIR Radio, retiring in 1992 to form his own video business, Bill Donnella's Videos and Such.

Bill was a member of the Indianapolis 500 Oldtimers Club, the Indiana Broadcast Pioneers and Tabernacle Presbyterian Church.

Calling will be in Tabernacle Presbyterian Church on Wednesday, January 15 from 12:30 p.m. until 2 p.m. A memorial service will be held at 2 p.m., immediately following the calling.