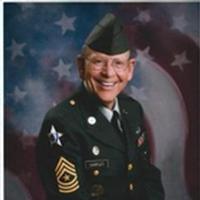 Donald “Roy” Sampley, “Sarge”, heard Jesus say “Well done, good and faithful servant. Enter into the joy of your Lord” and crossed in to heaven on February 26, 2015.

Roy was born in Rush Springs, OK, March 6, 1941. He left school at 7th grade to work to help support his family. In 1958, at age 17, he joined the United States Army. He retired as a Sergeant Major in 1988, after 30 years of honorable service. During his military career he served in Korea on the DMZ twice, in Germany three times and at various stateside bases. In 1972, he received orders to Vietnam, boarded the plane at Travis, AFB, flew over the San Francisco Bay and was then returned back to Travis AFB, CA. Since he had technically “shipped out” to Vietnam, he was included in the numbers of troops withdrawn from Vietnam. His military awards include: Meritorious Service Medal with two bronze oak leaf clusters, Army Commendation w/ 2 bronze oak leaf clusters, Good Conduct Medal- 8th award, National Defense Service Medal, Armed Forces Expeditionary Medal, Korea Defense Service Medal, NCO Professional Development Ribbon with numeral 5, Army Service Ribbon, Overseas Service Ribbon with numeral 3, Air Assault Badge, and Special Qualification Badge.

Following his retirement from the US Army, Roy worked for Smithfield Manufacturing, Inc. of Clarksville, Tennessee as a machinist, and later in personnel, retiring after 25 years.

Roy met the love of his life, and then married, Bernnice Byrd on May 9, 2004, in Nacogdoches, TX. He also gained 4 more children and 9 grandchildren, whom he loved as his own from day one. They honored him with the title “Pops,” because he was never a “step” father. Roy and Bernnice became involved in the VFW in Nacogdoches, where Roy served as Post Chaplain and Post Surgeon for 1 ½ years.

In August 2005, they moved to Blanchard, Oklahoma to be near Roy’s family. They joined Tony K. Burris VFW Post 3608. In 2007, Roy was elected Commander of the Post and held that position until 2014. In 2013, he was also elected VFW Department Surgeon of Oklahoma and in 2014, was elected as VFW Junior Vice Commander of Oklahoma. He was also District 10 Commander for 3 years. In 2013, he was selected, by his peers, as “Mr. VFW” for the State of Oklahoma, because of his many accomplishments over the years in VFW.

Roy was a member of DAV Chapter 17 of Chickasha, and American Legion Post 261 of Blanchard. He also served on the Blanchard Veterans Day Parade Committee since its inception, and was Grand Marshal of the parade in 2012.

Roy and Bernnice became members of Woodland Hills Baptist Church in Newcastle in 2009. Roy became very involved with the military ministry in that church and the Memorial and Veterans Day programs held there. He had a special relationship with the pastors and church staff and loved them dearly.

Roy was diagnosed with prostate cancer in 1996, which was due to his exposure to Agent Orange on the Korean DMZ. He refused to take the doctors’ suggestion to “go home, buy a recliner, and wait to die.” Instead he fought valiantly, never complaining, refusing to give in or let cancer get the best of him. He believed you had to think positively and trust in God. It was this positive and spirited attitude that the doctors attributed to keeping him alive through all the years of treatments, sicknesses, and spread of the disease. In 2004, his cancer spread and he continued to battle stage IV cancer until the end. Roy continued to share his smile and positivity until his last day on this earth.

Roy Sampley had a zest for life and a passion for people. He loved God, the USA, family, friends, community and fried taters and gravy from the bottom of his heart, which was never doubted by anyone he knew or met. On weeknights, as his health allowed, you would often find Roy and Bernnice eating dinner with friends at Dakota’s or KT’s. Roy spoke to everyone with kindness and went out of his way to honor every service member and veteran that crossed his path. His heart was bigger than his body could contain. Sarge Sampley was the biggest little man we knew; a true giant among men.

He was preceded in death by his daughters, April Sampley and Barbara Huddle; his parents, William and Bonnie Sampley; his grandparents, Joseph Smith Sampley and Mary Elizabeth Hampton Sampley; and John and Martha Evans; brothers, Frank, Hershel and Vick; and sisters, Sylvia Willoughby and Ethel Williams.

Roy is survived by his wife, Mary Bernnice Sampley of Blanchard; daughters, Camila Best and husband, Jeff, of Comanche, and Donna Baldwin and husband, Greg, of Tennessee; sons, Donald Roy Sampley, Jr. of Devol, and Christopher Sampley of Oklahoma City; stepdaughters, Crystal Mann and husband, Daryl, of Australia, and Lynnette Panarra and fiance, Allen Mitchell Jr., of California; stepsons, Terry Jones and wife, Nicole, of California, and Stuart Jones and wife, Gigi, of California; his brothers, Robert Sampley and his wife, Dolores, of Rush Springs, Ray Sampley and wife, Patsy, of Lawton, Rick Sampley and his wife, Jean, of Duncan, Billy Sampley of Lawton, and Derral Sampley of Lawton; eighteen grandchildren and thirteen great grandchildren; and many other loved ones and friends.

The celebration of Roy’s life will be held at 10:00 AM, Tuesday, March 3, 2015 at Woodland Hills Baptist Church in Newcastle. Burial with full military honors will follow in the Blanchard Cemetery. The family asks that everyone wear the colors that made Roy the happiest: Red, White, and Blue. Arrangements are under the direction of Eisenhour Funeral Home of Blanchard. Online obituary and guestbook are available at www.eisenhourfh.com.