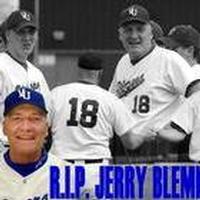 Jerry (Jerald William) Blemker , 67
NJCAA Hall of Famer and former Three Rivers Junior College and Vincennes University baseball coach Jerry Blemker died May 30th, 2012 at his home in Poplar Bluff, MO, known as “The Dugout” to family and friends. The devoted father and grandfather finally lost his ongoing battle due to complications from a series of medical problems that began in 2008.

The Huntingburg, IN native attended Indiana State University where he graduated Magna Cum Laude earning his master’s degree in Mathematics and a minor in Physical Education. He was the first ever Mathematics professor at Three Rivers Community College in Poplar Bluff, MO and initiated the baseball program as well as serving as assistant basketball coach for the first two years of the college's existence. He married Nita Leamon Blemker, a member of the first graduating class of Three Rivers, on December 21st, 1968. They had their first two children, Erik and Megan, in Poplar Bluff before moving to Indiana in 1980 to start a new life where he continued in the positions of math professor and head baseball coach at Vincennes University, Vincennes, IN. Not long after relocating, they added two more children, Gretchen and Zachary, to their family.

Over Blemker’s 38-year baseball career he accumulated the most wins by a coach in National Junior College Athletic Association Division II history when he retired from baseball in 2006. His 1,178 victories earned him a spot in the NJCAA Hall of Fame. He also coached the Gold Medal-winning North team at the 1993 U.S. Olympic Festival. More than 180 of Blemker’s VU players continued playing at universities throughout the United States. Twenty-seven of them signed professional contracts. In March 2009, the baseball field at Vincennes University was named in Blemker’s honor.

Coach Blemker was instrumental in positively influencing countless young men’s lives not only on the baseball field, but also in the classroom and in life.Many of his former baseball players and their families remain close personal friends. He retired from coaching baseball in 2006 but continued to teach mathematics until he suffered a debilitating stroke due to a benign brain tumor on the day he was beginning his 44th year of teaching.

Blemker claimed that the two years his younger son, Zak, played for him were the best of his baseball career. He always referred to his family as his greatest achievement.

Along with his wife, Nita, Coach Blemker is survived by his immediate family:
Son Erik, his wife Cammi, and their two children, Genevieve and Simon.
Daughter: Megan
Daughter: Gretchen and her husband James King.
Son: Zachary and his fiancée Kim Unnerstall


A memorial service will be held at Jerry Blemker Field on the Vincennes University Campus at 2pm on June 16, 2012. A reception will follow at Slicers Restaurant located in the club house at the Country Club of Old Vincennes.

An additional Celebration of Life gathering will be held in Poplar Bluff, MO, on July 14th at the Holiday Inn Express from 3-6pm.

In lieu of flowers, the family requests that donations can be made to ‘THE JERRY BLEMKER BASEBALL FUND’ at: People’s Community State Bank, 3529 S. Westwood Blvd, Poplar Bluff, MO. 63901, or donate to the charity of your choice.
White-Sanders Funeral Home at Fisk in charge of arrangements. Condolences: www.whitesandersfuneralhome.com