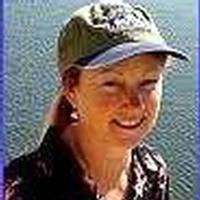 On Tuesday afternoon, December 16, 2014, Sue Foster, 58, entered the Eternal Kingdom of our Lord and Savior Jesus Christ, at Coastal Hospice at the Lake in Salisbury, with her family by her side. She had battled cancer for the past year.
Born Susanne Cary Mumford at Peninsula Regional Hospital on June 7, 1956, she was the daughter of the late Irving S. Mumford, III, and Juanita R. Feldmann Mumford. She grew up, and lived most of her life, in West Ocean City. She attended Ocean City Elementary School and Stephen Decatur High School, graduating in 1974. She was the class Salutatorian. Sue had been a member of the First Presbyterian Church of Ocean City.
Sue was an avid and expert fisherman, a successful businesswoman, and a prolific writer. She was an icon in the Ocean City fishing community. Fishing was her passion. Sue began fishing as a young girl, learning the skill from her late father, and she continued to fish until about a month before her passing. She loved to fish the coastal waters of Ocean City, Delaware, Virginia and the Florida Keys.
Sue's love of fishing lead to her other passion, the fishing bait and tackle business. Again, she learned the business from her late father, and from her late uncle, Paul V. Mumford. She worked with her father at Paul's Tackle Shop in Ocean City. In 1980 she and her family opened Oyster Bay Tackle in Ocean City. The store just completed its 35th season in business. A few years later they opened Fenwick Tackle in Fenwick Island, Delaware, and have owned and operated that store for 30 years. Sue was the face of the business. She built the shops into the premier fishing bait and tackle stores in Ocean City. She also expanded the stores into a successful internet business.
Sue was the author of the very popular Drifting Easy, a weekly article in the Coastal Fisherman, that offered advice on fishing and crabbing techniques. Her column first appeared on May 19, 1978, and continued through this year. She wrote and published the Ocean City Fishing and Crabbing Guide, and she wrote a weekly online fishing report, "Gone Fishing" at the Beach. She had authored fishing reports and articles for The Fisherman magazine, Beachcomber, The Entertainer and Oceana, had been a contributing writer for the Baltimore Sun. Her articles and reports have been enjoyed by thousands over the past 36 years.
Sue is survived by her best friend and husband of 17 years, Robert (Bob) S. Foster, III. She is also survived by two brothers, David J. Mumford and his wife Julie, Judge Daniel R. Mumford and his wife Liz, all of Ocean City; nephew Phillip J. Mumford and his wife Tamara, and grandnephew Fletcher David Mumford, all of Montgomery, Texas; nephew C. Fletcher Mumford and his wife Angie, and grandniece Mykaela C. Mumford, all of Jupiter, Florida; 3 aunts, Charlene and Joyce Mumford of Florida, and Peggy Mumford of Ocean City. She is survived by two very special friends, Linda Sklar Esham and Elizabeth (Libby) Kelly. She leaves behind her beloved lab Lucy. Her dear lab Reba predeceased her.
A memorial service will be held on Saturday, December 20, 2014, at 2 pm, at the First Presbyterian Church of Ocean City, 1301 Philadelphia Avenue, Ocean City. Pastor Alex Ayers will officiate. Friends may call at the church from 1 to 2 pm. Interment will be private in the Mumford Family Plot in Evergreen Cemetery near Berlin.
In lieu of flowers, donations in Sue's memory may be made to the Ocean City Reef Foundation, P.O. Box 1072, Ocean City, Maryland 21843, or to Coastal Hospice, P.O. Box 1733, Salisbury, Maryland 21802-1733.
Arrangements are in the care of the Burbage Funeral home in Berlin. Letters of condolence may be sent via: www.burbagefuneralhome.com