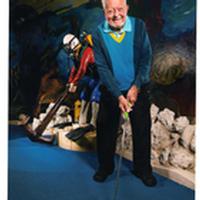 Herbert John Schoellkopf, Jr, known to most as Herb, and also as “the Old Pro”, passed away peacefully of natural causes May 5, 2016 at age 95 surrounded by his family. He was a loving and well-loved family man, a hardworking businessman with great creativity and imagination, a very patriotic veteran, and a playful man who loved athletics, music, tropical travel, scuba diving, humor, and dancing. Of his many sayings and mottos his standout advice to all was “work hard, play hard”. He was generous in many ways, and was especially supportive of organizations that serve those with disabilities.
He was born in Camden, NJ on May 4, 1921 to Herbert John, Sr and Helen Sturr Schoellkopf. As a child he lived through the depression, in which his family was hit very hard. He attended Camden High, where he was a track star who ran on the winning mile relay team in the Penn Relays in 1938 and 1939. He attended Guilford College as an undergraduate, interrupted by several years in the Army during WWII, where he served in the Pacific as an officer in a medical evacuation corps, served in New Guinea and the Philippines, and participated in the occupation of Japan. He was honorably discharged as a Captain, and returned to college where he earned many varsity letters including football, basketball, and track. He graduated in 1948 with a degree in Physical Education. Following that he received his Masters in Education with a minor in Business from the University of North Carolina, coached college athletics and taught for a couple of years, then moved back to South Jersey in 1950, where he began a career in family entertainment that lasted the rest of his life. In this career he built over 150 miniature golf courses and amusement centers, and gradually came to own and operate as many as 20 locations along the East Coast. He raised his family between Cherry Hill, NJ and Ocean City, MD, moving full time to Ocean City in the early 80’s. He is legendary in the history of miniature golf for developing fantastically imaginative and highly themed courses, with animated figures, and dynamic large scale features including waterfalls, pirate ships, dinosaurs, volcanoes, castles, temples, undersea worlds, and treehouse villages. He also pioneered the development of indoor themed courses. He was a big fan of Walt Disney, and he loved his concept of “Imagineering”. By the early 80’s he consolidated his business to the four Old Pro Golf locations in Ocean City, Maryland that continue to be operated by his family, and of which he remained active as president to his final day.
Herb was very blessed with two wonderful spouses in his life. He was predeceased by his first wife Aileen Belton “Deany” Schoellkopf, of Winston Salem, North Carolina, whom he met in college, married in 1950, and who passed away too soon in 1988 at the age of 60. He is survived by Judy Johnson Schoellkopf, his loving wife of the last 25 years. He was predeceased by his three siblings, Robert, Dorothy Gahm, and June Baldwin, who all lived into their 90’s. He is survived by his children; Jeff and his wife Beth, Rick, Nancy and her husband David Coats, and Scott and his partner Maria Cerrato, his daughter in law Rene Schoellkopf, Judy’s daughters Stephanie Johnson and her husband Alfredo, and Christy Crow and her husband Jeff, and grandchildren Carson, Brin, and Aidan Schoellkopf of Warren, VT, Celia and Roxana Coats of Raleigh, NC, Sam, Luke , Lila, of Berlin, MD, Quincy Crow of Indianapolis, IN, and Elson Schoellkopf of Ocean City, MD.
The Schoellkopf family would like to thank all of the many doctors who cared for him over his adventurous and eventful life, and particularly the extremely caring staff at AGH during his last short time there on the day of his peaceful passing.
A memorial celebration will be held 4-7pm on May 24th at Fager’s Island in Ocean City, MD, following a private family burial in Mount Laurel, NJ.
In lieu of flowers please send donations in his name to the AGH Foundation in Berlin, MD, the American Cancer Society, or the WWII Museum in New Orleans, LA.
Letters of condolence may be sent to the family at www.burbagefuneralhome.com