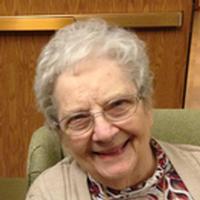 Shirley was born on December 3, 1931 in New Ulm, MN to Aaron and Divina (Wendorff) Kaegbein. She graduated from the Fairfax, MN High School and attended St. Olaf College. When her schooling was finished, Shirley was employed as a secretary for Harmon Glass in Minneapolis. During this time, she would come and spend time with her sister and family in Whitehall. It was during one of these visits that she met the love of her life, Spencer Hanson. Shirley and Spencer were married on October 16, 1954 in the Fagernes Lutheran Church in rural Blair of which they were lifelong members.

When Shirley moved to rural Wisconsin, she became an active part of their farm. She fed calves and did the normal “running to town for parts” of the average farm wife. As Spencer hired men to help on the farm, Shirley also had to cook for these men. She was a very busy farm wife.

Shirley enjoyed gardening, as was obvious of the addition to their home of a solar sun space where she could grow vegetables year round. Painting was another love and talent. Her family continues to enjoy her artwork as it is displayed on their walls. Musical ability was very abundant as she played the organ at the Fagnernes Lutheran Church for many years. As a life companion of Spencer, Shirley followed him wherever his bands were playing and enjoyed listening to the music and socializing with friends.

Shirley is survived by a sister, Delores Ausderau of Whitehall; two brothers, Richard (Alice) Kaegbein of Surprise, AZ and James Kaegbein of Onamia, MN; several nieces and nephews and their families.

In addition to her parents and husband, Spencer, who died on March 3, 2009, Shirley was preceded in death by a brother, Chester Kaegbein.

Funeral services will be held on Tuesday, October 4, 2016 at 2:00 p.m. in the Fagernes Lutheran Church with burial in the church cemetery both in rural Blair. Pastor Roger Knudson will officiate. Friends may call one hour prior to the service.