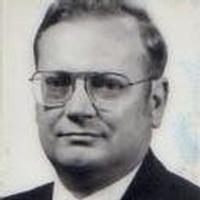 John was born February 17, 1935 in Moline, IL to Francis and Mary (McFadden) Robyt. After graduating from Alleman High School in Moline, he earned a B.S. degree in chemistry from St. Louis University in 1958 and married Lois Teft Kennedy that same year. After earning his PhD in Carbohydrate Chemistry and Enzymology from Iowa State University in 1962, he received a teaching postdoctoral at Louisiana State University. In 1963, John received a Research Fellowship at the Lister Institute of Preventative Medicine in London, England. He returned to Iowa State in 1964, and in 1967 became an assistant professor in the Department of Biochemistry, Biophysics, and Molecular Biology until he became a full professor in 1982.

John’s groundbreaking research led him to be featured in numerous professional publications and two textbooks, including "Essentials of Carbohydrate Chemistry."

In his leisure time, John enjoyed coaching hockey and baseball. In addition to being the Student Advisor for the Iowa State Hockey team, he served as President of the Ames Minor Hockey Association for many years. John also enjoyed gardening, watching Chicago Cubs baseball, and many activities with his family, including extensive travel.

A Funeral Service will be held at 11 a.m. on Thursday, March 2, 2017 at Thurston-Lindberg Funeral Home, 2005 Branch Avenue, Anoka, with Reverend Dale Sisam, officiating. Visitation will be one hour prior to the service (10-11 a.m.) Interment Forest Hill Cemetery, Anoka.