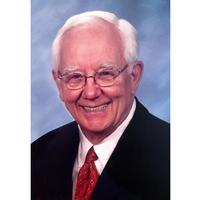 Bill was the only child born to William Wilson and Alice Niemeyer Scroggin on September 18, 1927, in Little Rock, Arkansas.  Bill graduated from Little Rock Central High School and the University of Missouri.  While at Missouri, he met his true sweetheart and future wife, Jeanne Olson Scroggin, who he was married to for 63 years.  He was also a proud member and President of the Sigma Alpha Epsilon Fraternity and Captain of the Golf Team, which earned him letter in golf and continued to shape his love of the game.  While raising four children with Jeanne, Bill spent his career with Price Candy Company for 35 years and retired as Executive Vice President in 1987.  He was Past President and on the Board of Directors at Indian Hills Country Club.  He was a member of St. Andrew’s Episcopal Church.

As a storyteller, it was unmistakable that Bill’s family was his pride and joy.  Their happiness came first. “Pops” modeled the importance of family, love, humor and hard work for his children and grandchildren.  When telling a new or familiar story, these themes wove through his narration of the past.  Bill also found great joy in the many friends he made along the way.  He valued his friends of all ages.  Many of those friendships were formed at the golf course and enjoyed through his Birdie Bogey group and countless games at the Indian Hills’ gin rummy table and later at RC’s.  He was always in pursuit of the happiness of others through a good laugh, or welcome shout-out.

He was preceded in death by his parents and his brother-in-law, Donald Olson.

Memorial services will be at 4pm on Saturday, March 11, at St. Andrew’s Episcopal Church, 6401 Wornall Terrace, Kansas City, MO 64113.  Friends are invited to the Jewell Room of the church, immediately following the service to visit with the family.  Private family burial.