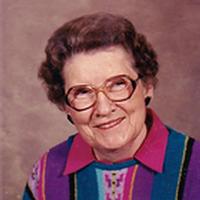 
Edna was born May 29, 1913 in Statesboro, GA. to the late John B. and Laura Woods Brannen. Her mother passed away when she was very young and Edna was blessed to gain a step-mother, Josephine Waters Brannen to help raise her into young adulthood. She was valedictorian of her graduating class in high school and played basketball. In no particular hurry to get married, Edna went to work in Savannah in a clothing factory. When she finally decided it was time, she married Ambrose E. Nesmith and started her little family. They soon moved to Jasper and she went to work in the local department stores until she and friend Myrtle White decided to go into the floral business together which was a great success. Eventually Edna went to work at Stephen Foster Memorial Park in White Springs where she will be remembered as one of those lucky ladies that got to dress up in the big hoop skirts and play southern hostess in the gift shop.

Edna had a kind spirit with just a little bit of humor she dipped into occasionally. She always reminded Linda in that humorous sass that one day she was going to miss her. Leaving behind so many that loved her; she no doubt will be missed by all. Edna was a faithful member of the First Baptist Church in Jasper as long as her health permitted.