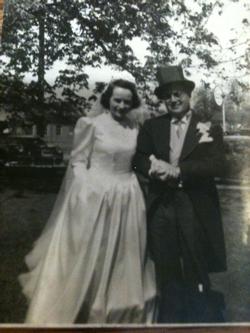 Your Friends & Neighbors For Generations

It was the spring of 1942 when John Bangs opened his funeral home on West Buffalo St., in the shadow of Washington Park, with the belief that his friends and neighbors in Ithaca and surrounding counties deserved an affordable, reliable and trustworthy funeral provider. From those humble beginnings 74 years ago, Bangs Funeral Home has grown to become the largest funeral service provider in Tompkins County by staying true to those beliefs.

In 1943, John met a shy, quiet operating room nurse from Scipio Center named Rita Powers. John & Rita were married in 1944 and in 1945 at the urging of the Tompkins County Hospital, Bangs Ambulance was founded with Rita becoming the pioneer of Emergency Medical Services in Tompkins County. From 1942 until his death in 1974, John & Rita cared for the well, the sick and the grieving all while raising their seven children.

Following a brief stop on State St. in the late 1940's, the funeral home landed at their historic location at Green and Albany Streets in 1949 and has been operated by John's sons, Jeff and Kevin since John's death.

Many things have changed in Ithaca since 1942 but one thing that hasn't changed is the comfort of knowing that when you drive past Bangs Funeral Home, the owners are inside. As Ithaca's only locally owned funeral home we understand the importance of community and supporting those who have made a sustained commitment to the Ithaca area.