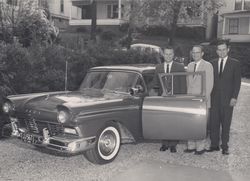 Jagers Funeral Home was started in 1923 by John Jagers. The business was initially located at 10 W. State Street. It was later moved to 34 N. Congress and finally to its present location, 24 Morris Avenue, in 1967.

Many changes have occured since John began the business. One major change is the custom of using the home of the deceased as the place of embalming and funeral service.