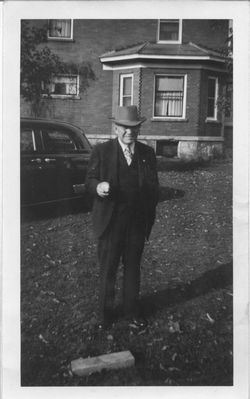 Our Founder, Mr. Thomas R. Palmer began work as an apprentice mortician with A. A. Wilbur furniture and undertaking company of North Lansing in 1889. After 10 years with the Wilbur company Mr. Palmer went to Grand Ledge and joined the W. H. Joy company. Fourteen months later he left to join the E. S. Butts company of Lansing. After four years with them he left and joined the M. J. and B. M. Buck company and took over the management of the Buck company in 1912. In 1926 Mr. Palmer left the Buck Company and purchased a part interest in the O'Donnell funeral home at 427 S. Capitol Avenue. The name of the establishment was changed to the Palmer-O'Donnell Funeral Home and in 1926 Mr. Palmer purchased Mr. O'Donnell's interest in the company. In 1928 Mr. Palmer built a new funeral home on South Washington. It was deemed one of the most modern facilities in Lansing and had seating for 300 people.