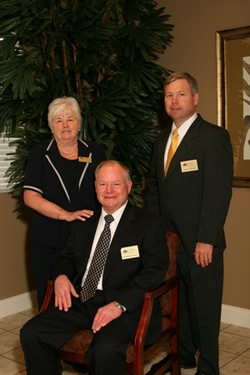 Our History The Roberts Family has been dedicated to funeral service since 1898, When C.V. Roberts, a dedicated community leader, first entered the profession in a small frame building in Ocala.

In 1937, C.V. passed the business to his son, Edgar S. Roberts, and together they owned and operated Roberts Funeral Home at it’s present location in downtown Ocala. Edgar’s two sons, Terry and Kenneth, followed in the family tradition by entering the funeral profession, and were actively involved in the family business. The Roberts Family were visionaries, and in 1964 built the first and only crematory in North Central Florida and for many years provided cremations for other funeral homes. The family also developed Good Shepherd Memorial Gardens, the first privately owned perpetual care cemetery west of Ocala. In 1969 they opened a second location in Dunnellon to better serve all of the families in Marion and surrounding counties.

Kenneth assumed the independent control of the Dunnellon funeral home in August of 1992 and it was shortly thereafter that his vision called for the complete remodeling of the facility making sure that each family received the best in facilities, service and technology. Patty, Kenneth’s wife, joined the team and assisted with the business that is deeply rooted in tradition. Patty continues to provide services to the many families touched by Roberts Funeral Home and assists in the daily operation of the family’s business.

In 1994, Patty and Kenneth opened Florida Cremation Society, LLC., a state licensed direct disposer facility as an alternative to formal funerals that had been their mainstay. It didn’t take long for Kenneth’s son, Kevin to realize that he too, had been called into the family business. Kevin’s desire to provide direction and assistance to families in need coupled with his strong work ethic launched Florida Cremation Society into the thriving business it is today. Kevin is joined by other dedicated professionals who’s passion is to build relationships that span a lifetime. This progressive business provides an affordable and reputable alternative to traditional funeral services.

Sadly, in 2017 Kenneth Roberts suddenly passed away. The family tradition of serving others moves forward as his wife Patty and their son Kevin operate Florida Cremation Society. Kevin is a fourth generation of a family that has been caring for Marion and surrounding areas for well over 100 years.