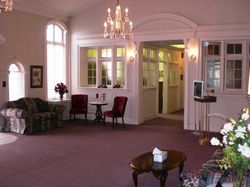 The Davis Mortuary has been serving the families of Pueblo, Colorado and the surrounding area continuously since 1905. The Mortuary was originally located in downtown Pueblo. It was relocated to its current location, on the Mesa Junction at the corner of Broadway and Evans, following the flood of 1921. Mr. A. Ray Davis founded the Mortuary which still carries his family name. He passed it on to his son, Elwin Davis who operated it for many years. The upper two floors of the facility are home to Pueblo's three Masonic Lodges and their affiliated organizations. To better serve the community, the Davis Mortuary added Southern Colorado's first Crematory in 1971. In 1989 the Mortuary was purchased by Brian and Chris Cotter who were raised 80 miles to the south in Trinidad, Colorado. The Cotter brothers brought with them to the Davis Mortuary the "old school" ways of caring for families in need which they learned from their father who owned and operated several funeral homes in Kansas, Nebraska, and Southern Colorado. Brian and Chris Cotter are able to serve their friends and neighbors from throughout the region with a compassion that is sometimes rare in the funeral business today. Their personal as well as professional relationships with other funeral homes in the region allow them to provide embalming, cremation and transportation services to funeral homes throughout Southern Colorado and northern New Mexico. They also provide all required transportation for deceased under the jurisdiction of the Pueblo County Coroner's office. In this era of mega-size corporate funeral home chains it is truly refreshing to find a family still here to serve yours when they need it. They are not concerned with faceless stockholders or satisfying a far off CEO with high profit numbers. Their only consideration is helping their friends and neighbors in need.