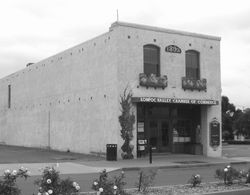 The first “undertaker” to help in the early colony of Lompoc was Joshua Barker. He came here in the mid-1870’s. The first actual mortician, Henry (also known as Harry) W. Lambert arrived in 1876. He operated a furniture store, which he sold to James H. McGee in 1893. The furniture store still exists today in the 100 block of South H Street.

In 1900, James Campbell Long took over the furniture store with the casket room and mortuary operation upstairs. Services were held in families’ homes. James Long used an ornate black hearse drawn by black horses. He served both the Lompoc and Santa Ynez Valleys for two decades before selling the business to Frank Belcher in 1923.

In 1928, Frank Belcher sold the business to Henry Alter and his wife, Florence who came to Lompoc from Porterville in 1920. Henry worked with Frank for nine years, conducting the mortuary business, while Frank took care of the furniture store. When Henry took over, he named his undertaking establishment Alter Undertaking Company. It was located in what is now the Lompoc Chamber of Commerce building on South I Street.