A look to the future with reverence for the past.... 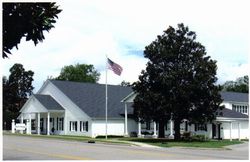 In 1949, Berkeley County's first funeral home, "Dial Funeral Home", was founded by J. Chalmers Dial, Sr., and his wife Lorraine.  The first establishment was located at 220 West Main Street in Moncks Corner.  In 1952, the business moved into larger facilities at 300 West Main Street, where the present Dial-Murray Funeral Home continues to operate today. In 1961, Dial Funeral Home established a chapel in St. Stephen.  This chapel facilitates visitations and funeral services for families in St. Stephen and the surrounding areas and is still in operation today. In 1974, the Dial Funeral Home was purchased by a longtime employee, George P. Murray.  With new ownership came new ideas and change.  The name Murray was added to the existing name and it became, as it is known today: Dial-Murray Funeral Home. In 1995, the baton of ownership passed to a longtime employee, Michelle A. "Shelly" Cooper. Under Shelly's direction, the funeral home completed an extensive renovation and remodeling program in 2003. These improvements included a new and enlarged chapel, two new visitation rooms, a new casket selection area, and additional parking. Dedicated to the future of Dial-Murray Funeral Home, the entire staff avows the desired purpose to provide the very best in facilities, but even more importantly, the very best in funeral care giving. Trained and skilled in all phases of funeral needs, the staff dedicates themselves to serving those families and individuals who place their trust and confidence in Dial-Murray Funeral Home.