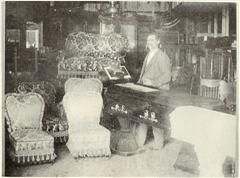 Henry Martin immigrated with his family to Sheboygan, WI from Prussia in 1855 at the age of five. A furniture and cabinetmaker by trade, he moved to Harpers Ferry in 1873 and relocated to Waukon in 1876, shortly before the railroad arrived. As was common for the period, his talent for making and access for selling furniture soon expanded to making and selling caskets. A stronger committment to funeral service was made when he completed training at the Oriental School of Embalming in Chicago in 1887.