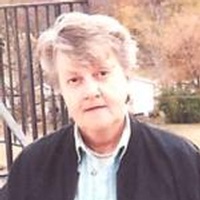 Carolyn Campbell Mitchell of Falls of Rough died on Saturday, May 29, at the Springview Nursing Home in Leitchfield, after a six-month battle with cancer.

She was born in Louisville on July 6, 1941 and was a member of the Leitchfield High School Class of 1959. Formerly married to the late Carl (“Mitch”) Mitchell, she lived in a variety of places and held a variety of jobs before settling in Falls of Rough in the mid-90’s on the farm that once belonged to her grandparents. She stayed there for the rest of her life, which she devoted to maintaining the homestead and caring for her companion.

She is survived by her father, Frank Campbell (Mary) of Glasgow, one brother, Mike Campbell (Nancy) of New Albany, IN, and two sons Eddie Mitchell (Keith) of Louisville and Danny Mitchell (Mary Pat) of Chattanooga, TN. In addition, two grandchildren, Claire and Benjamin also survive, as does her companion of many years, Bear Rowell of Falls of Rough.

She was preceded in death by her mother Dorine Campbell and her brother Larry Campbell.