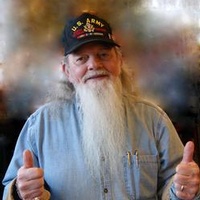 Discharged from his deployment here on Earth to final R&R at his true home with God in the Heavens.

Lonnie was born and raised in the coal mining area of Jenkinjones West Virginia. As his father, Hite Dillon, was killed in a coal mining accident when he was six, Lonnie and his six brothers were raised by his mother Mae Dillon, now deceased. He is also predeceased by four of his brothers: Muncie and Jack Jones and Leonard and Gene Dillon.

At fifteen Lonnie enlisted in the Army and was deployed first to Germany and then to the war going on at that time in Korea. Landing at Inchon, his 32 Infantry Regiment, 7th Division fought north through the snow and cold almost to China. On return to the States he worked a variety of jobs including in Indiana firing kilns, working as a railroad brakeman, and driving mushroom soil from Virginia to Pennsylvania before coming to Delaware to spend thirty-three years at General Motors Wilmington. An active union member there, he served in many positions as committeeman and union official, always having Pat with him in his business travels throughout. Even after retiring from GM Lonnie continued working. Most recently he was employed for over ten years at St. Andrews School where he enjoyed meeting and transporting the youth and teachers alike. Apparently they enjoyed him as well and he left only because he became ill.

Lonnie was a member of both Ionic and High Noon Masonic Lodges, Nur Shrine, and was a Past Patron of Naomi #20, Order of Eastern Star. He was an active member of the Townsend Sportsman Club, the VFW, the Moose, the Korean War Veterans, the Vietnam Veterans MC Club of which he was a past treasurer and ABATE of which he was a past President. He and Pat enjoyed deep-sea fishing, riding their Harley Davidson motorcycle, and the many wonderful things they saw at sea and on land. Lonnie had no particular hobbies except his full enjoyment of all people and talking and interacting with them. One of the high points of his life was his and Pat's trip to England and Scotland to visit the Roslyn Chapel.

He leaves behind his friend, private-duty nurse and wife of 53 years, Pat. Also surviving him are daughters Cindy (Darren) and Kathie, grandchildren Christopher, Kevin, Matthew (Mel) and Adelia, and great-grandchildren Meghan and Myra. He is also survived by two brothers John Jones of Indiana and Edward Dillon of VA and numerous nieces, nephews, great nieces and great nephews.

A Visitation will be held Friday, December 18th from 7-9 pm at Daniels & Hutchison Funeral Home, 212 N. Broad St., Middletown, DE 19709, Order of Eastern Star Service will be held at 7:45 pm followed by Masonic Services at 8 pm.
On Saturday, December 19th a service in Celebration of Lonnie's life will also take place at the Funeral Home at 1pm with a short time of visitation from 12:30 – 1 pm prior to the service.
Interment with Military Honors will be in the Delaware Veterans Memorial Cemetery on December 28, 2015.

On behalf of Lonnie, the family would like to thank the many friends who have extended thoughts, prayers and many acts of kindness these past few months. A special thanks to Dr. Biggs and his staff and DE Hospice's Ashley, Tiffany and Chrissy for their patience, comforting and calming manner and concern in trying to help give Lonnie the best care possible.