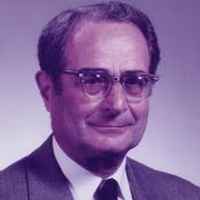 Jamille G. Jamra died Monday April 8, 2013 in Ebeid Hospice Residence in Sylvania at the age of 95. He was born September 24, 1917 in Toledo to Albert, Sr. and Elizabeth (Kerbawy) Jamra.
Jamille graduated from DeVilbiss High School and earned his Bachelor of Arts degree from Northwestern University and his Juris Doctor degree with distinction from the University of Michigan Law School in 1941. On July 20, 1943, he married Betty Gene Chapman who preceded him in death in 2002.
After serving in the U.S. Army Air Corps in the pacific theater during World War II, he began his career as a litigator with the law firm Eastman & Smith and remained there until his retirement in 1992. He was admitted to practice in Ohio, the U.S. District Court for the Northern District of Ohio, U.S. Court of Appeals for the Sixth Circuit, the U.S. Supreme Court and was a lifetime member of the Judicial Conference of the U.S. Sixth Circuit Court of Appeals.
Mr. Jamra’s professional associations included Lucas County Bar Assoc., Toledo Junior Bar Assoc., Toledo Bar Assoc. where he was past president, American Bar Assoc., American College of Trial Lawyers, American Bar Foundation, Association of Insurance Attorneys and the Law Alumni Assoc. at the University of Toledo where he received the Distinguished Attorney Award in 1982. He was a member of the Ohio State Bar Assoc. where he was a past president and served on the executive committee and was a recipient of their highest award, the Ohio Bar Medal. He served as a member of numerous legal boards including the Board of Trustees of the Ohio State Bar Foundation earning the Foundation’s Award for 50 years of Service to the Public, the Ohio Legal Services Fund, Ohio Bar Liability Insurance Company and Toledo Law Association. Mr. Jamra also served in the community on the Boards of Trustees at Riverside Hospital, Medical College of Ohio Foundation, Toledo Area Chamber of Commerce. He was a senior Warden of Trinity Episcopal Church, Clerk – Treasurer of the Village of Ottawa Hills and was inducted to the DeVilbiss High School Hall of Fame.
Jamille is survived by his children Ellen (Roger)Linkey, James (Laura) Jamra and Mark Jamra; grandchildren Brooke Janser, Jamie, Christine, and Sarah Jamra; sister Jeanette Habib, brother Albert Jr.( Eva) Jamra; sister-in-law Mary Chapman; brother-in-law Richard Chapman and nieces and nephews.
Memorial funeral services will be held Saturday at 11 AM at the Foth – Dorfmeyer Mortuary 3815 Sylvania Ave. (Between Monroe St. & Talmadge Rd.). In lieu of flowers the family prefers memorial tributes be made to Trinity Episcopal Church, Toledo Museum of Art or the Toledo Community Foundation.