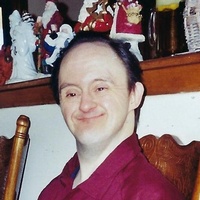 Kenneth Wesley “Kenny” Scroggins, 60, of Blanchard, passed to his eternal home on Tuesday, November 27, 2018 in Norman. The son of Earl Wesley “Spike” Scroggins and Neva Evelyn (Johnson) Scroggins, he was born January 16, 1958 in Oklahoma City.

Kenny loved watching I Love Lucy, Carol Burnett and Lawrence Welk. He will be missed by many and is rejoicing in Heaven with his parents and sister.

Kenny was preceded in death by both his parents and one sister, Joyce Scroggins.

He is survived by his two sisters, Wanda White, of Mustang and Anna Mae White and her husband, Charlie, of Blanchard; three nephews, Jeff White and his wife, Cynthia, of Blanchard, James White of Blanchard, and Russell White and Johnna York of Piedmont; and one niece, Gena White of Yukon. Kenny is also survived by several great-nieces and nephews; and many other loved ones and friends.