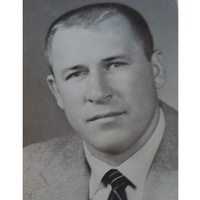 Born in Nashua, NH on September 29, 1929, he was the youngest of eight children of Adolph and Tekla (Luzcyska) Kissell. He resided in Methuen, MA for ten years, before moving to Bedford, NH in 1974.

He attended Nashua High School and graduated from Marianapolis Preparatory School. He earned a bachelor of arts degree in history from Wake Forest College. Ed received a master’s degree in physical education from Boston University. He was a member of the Alpha Sigma Phi Fraternity.

During the Korean War, he served in the United States Army.

Until his retirement, Ed was a physical education teacher with the Manchester School District at Parkside Middle School for many years.

An outstanding athlete, Ed played professional football as a quarterback and safety with the Pittsburgh Steelers. Ed was one of five brothers that played for the NFL and one of oldest living players in the league. He also coached several high school football, baseball, and basketball teams as well as youth leagues.

Devoted to his faith, he was a longtime communicant of Saint Elizabeth Seton Church.

He was a member of the American Legion Post 79.

Ed devoted himself to his family and provided for them with the utmost humility, selflessness, and endurance.

Services: Calling hours are Tuesday from 4 to 7 PM at the Connor-Healy Funeral Home and Cremation Center, 537 Union Street, Manchester, NH.

The funeral will be held Wednesday with a mass of Christian burial to be celebrated at 10AM in Saint Elizabeth Seton Church, Bedford, NH.