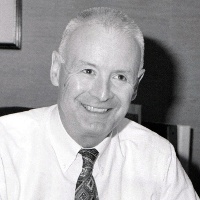 A long-time Tufts University planner, academic and devoted father to three children, Jack had retired with Patti, his wife of 62 years, to Jackson, NH, in the heart of the White Mountains he loved.

An energetic hiker and cross-country skier, Jack was a member of the AMC's 4,000' Club, as well as a prolific author of travel books and family genealogies.

In 1970, Jack decided to enter higher education, and the family, now with three children, returned to the USA. With an MAT degree from the Harvard Graduate School of Education in hand, Jack turned his job as assistant to the President of Tufts University into a twenty-year career there, where he rose to Vice President for Institutional Planning. In 1989, he formed the Center for Planning Information, Inc., a not-for-profit group supporting colleges and universities. This became the Higher Education Data Sharing Consortium, which prospers to this day.

After three years as President of Dean Junior College in Franklin, MA, he retired in 1995, moving to Jackson, NH. Never one to rest on his laurels, Jack became the director of the Mount Washington Observatory from 1996-1997, the moderator for the Jackson Community Church, and served on multiple boards of trustees in the area, including Mountain Top Music Center and Fryeburg Academy.

In 2015, the couple moved to RiverWoods in Exeter, NH. Known for his quiet diplomatic style, he immediately turned his institutional planning expertise to the community’s service as a Resident Council member.

Elected soon after to be a Resident Council Trustee, Jack's warmth, intellect and enthusiasm endeared him to all.

Gifts in Jack’s name can also be made to Mountain Top Music Center, P.O. Box 1228, Conway, NH, 03818, in support of a scholarship fund at an institution whose growth was important to him."

From his family, with fond memories of 85 years of life and love.