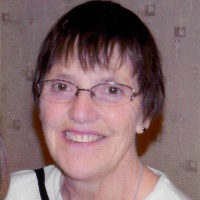 Diane Boulais, 67, made her transition to her next adventure, Saturday, August 3, 2019, at home, after a long struggle with Huntington’s Disease. Diane was born in 1952 and raised in Pittsfield, MA, the third of six children born to Dolores (Gilbert) Boulais and Paul Boulais, Sr.

She will be dearly missed by her wife, Ann M. Schrader, of Ludington, MI, her beloved sister, Debra Graves (Ralph), baby sister, Denise Boulais, of Brandon FL, special nieces and nephews, precious great nieces and nephews, and dear friends.  Diane always considered her fur-children to be her babies.

Diane was predeceased by her parents; as well as her three brothers, Paul Jr. of Pittsfield, Joseph, of Boston, and Richard, of Ludington.

Diane’s spiritual home was The Abode in New York state where she studied to be a Sufi under Pir Vilayat Inayat Khan for several years and made many lifelong friends who knew her by her Sufi name, Khalila.  She and her cat enjoyed living there in a treehouse during the summers.

Diane was educated as a surgical tech, and worked as such for many years in Massachusetts and California.  No matter how far she roamed, she was always a loyal New England Patriots fan.  After she survived the 1994 Northridge earthquake, Diane reexamined her priorities and moved to Florida to be near her sister, Debi.  She jumped at the chance to work at a horse ranch with her half wolf/dog, Washakie.

Then Diane and Washakie moved to NW Michigan to help a friend with organic farming.  When that project ended, she worked at the Silver Lake sand dunes leading bands of novice dune buggy drivers through the dunes in red jeeps.

Soon, Diane moved a little farther north to Ludington on Lake Michigan where she discovered the Unitarian Universalist principles and People’s Church, and never left.  Diane was welcomed and loved by the warm people she met there and she thrived.  She served the church on several committees and as president of the board for many years.  In 2001, she met Ann at church, and they were married there in 2003.  The couple designed and built their home in Hamlin Township with enough room for lots of guests and, for a while, four dogs and two cats.

Volunteering was Diane’s true calling.  Diane’s car, and then her power wheelchair, drove automatically to West Michigan Community Mental Health (CMH) where she helped organize events, shared ideas, chaired several committees and served on the board of directors for many years.  Honored by the state, Diane spoke at rallies and conferences against stigma, at the Michigan statehouse to promote the power to heal, and twice CMH sent her to Washington DC to convince congress members of the wisdom of insurance parity.

A celebration of her life will be held this fall.  The family sends its infinite gratitude to Tammy O’Brien, Diane’s caregiver, who is surely and simply an angel.  Diane was known for her tremendous heart and love of nature and music.  In lieu of cut flowers, plant a tree or something you love in your yard, donate to Hospice of Michigan, People’s Church, The Abode, an environmental or humane organization, or the cause of your own heart.