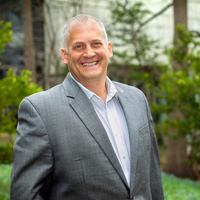 Dr. Greg Eells passed away unexpectedly on Monday, September 9.   Our sorrow at this loss is profound and deep.  Yet we are blessed by memories of the life he lived. Greg was an amazing light in this world--a real gift to all who were lucky enough to encounter him on their journey.

He had a rare ability to make everyone he met feel special. He was known for unmatched enthusiasm concerning a wide range of interests and pursuits—from sports and music to history, political science, and literature.  His professional accomplishments were vast.

Greg’s work as a psychologist and leader was more than a job; it was an extension of his personality.  He combined top-notch skills with humble approachability and deep reserves of empathy. Even a professional lifetime achievement award in his 40’s left him unfazed; his focus remained on helping others manage the transitions and challenges of life.

To Michelle and the children, Greg was kind and devoted, a Mr. Incredible whose superpowers included love and laughter, warmth and wit.  He was a coach, mentor, and role model to his family and many in the community.  Greg was a fixture at his children's sporting events; it was clear he treasured those moments.

Greg’s loyalty and playful spirit made him a cherished friend.  Whether he was offering a crushing bear hug or a potent drink “made with love,” Greg lifted the spirits of those around him.  He was the first person you wanted on your team for a game of Name That Tune or Trivial Pursuit, where his encyclopedic knowledge of the most obscure facts gave him an edge his competitors could rarely overcome.

Always interested in philosophy and religion, Greg was both a careful scientist and man of faith. He worked to reconcile his beliefs with the imperatives of the natural world.  He thought deeply about the age-old question of what it means to live a good life. Many will tell you that Greg’s guidance and his example had a profound effect on their own faith journeys.

Greg will be remembered lovingly by Michelle, his wife of 27 years; their children, Kayla, Cole, and Cade; his mother Jeanette Eells-Rich and step-father Richard Rich; his brother Jeff Eells and sister-in-law Christy Eells; step-siblings Tanga Coffey and Tony Rich; his mother-in-law Rosemary Weaver and step-father-in-law Ron Weaver, his father-in-law Michael Birdsell and brother-in-law Jason Birdsell, along with many aunts, uncles, cousins, nieces, nephews and friends.  He was predeceased by his father Richard Eells.

A life full of energy has not ended, but has been transferred to all who knew and loved Greg.