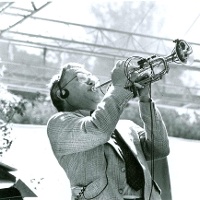 Dexter George Morrill, Charles A. Dana Professor of Music emeritus at Colgate University, was born June 17, 1938 in North Adams, MA. He began trumpet lessons at age eight and by 19, studied with Dizzy Gillespie at the first Lenox School of Jazz. At Colgate University ‘60, he studied composition with William Skelton and led a Dixieland jazz band, the Colgate Hi-Five. He began graduate studies at the Leland Stanford Junior University and studied composition with Leonard Ratner and orchestration with Leland Smith, completing his MA in 1962. From 1962-64 he was a Ford Foundation Young Composer Fellow in Missouri, and later taught at St. John's University in New York, that commissioned his Three Lyric Pieces for violin, premiered by Ruggiero Ricci at Lincoln Center in 1969. Morrill studied composition with Robert Palmer at Cornell University and received his DMA in 1970.

Morrill returned to teach music at Colgate in 1969 and established one of the first mainframe computer studios in the world, with help from colleagues at Stanford. He collaborated with John Chowning and Leland Smith at Stanford; Max Matthews and conducted analysis/synthesis of trumpet tones. He was a guest researcher at IRCAM in Paris, France in 1980, and received several composition grants from the New York State Arts Council and the National Endowment for the Arts. Morrill worked on a special jazz project for Wynton Marsalis, and authored A Guide to the Big Band Recordings of Woody Herman and The American String Quartet – A Guide to the Recordings.

In 1984, Morrill received a NEA grant to compose his most prominent work, Getz Variations. It was written for, and premiered by saxophonist Stan Getz, and incorporated jazz improvisation and computer-generated sounds. During the 1980s, Morrill developed a MIDI trumpet instrument with engineer Perry Cook, and performed in many concerts around the world. His compositions received performances in the United States, Canada, Australia, Argentina, Brazil, Great Britain, Poland, Czechoslovakia, and most West European countries, and for ensembles including the Northern Illinois Philharmonic and the Syracuse and Baltimore Symphonies. Throughout his career, Morrill was active in composing for ensembles and conventional instruments and recording works with solo artists.

Dexter passed away July 2, 2019, of complications from Progressive Supra Nuclear Palsy (PSP). He was predeceased by his parents Frank and Beatrice Morrill, his brother Richard, and sister Jane Geraghty. He is survived by his wife of 56 years, Barbara Dodds Morrill, daughters Jennifer, Washington, DC, and Allison Morrill Chatrchyan (Tigran) and their children Elena and Robert, Dryden, NY, sisters and brothers-in-law and many nieces and nephews. He was a member of St. Paul’s United Methodist Church in Ithaca. A memorial service and interment at Colgate University will be held later. In lieu of flowers, the family requests memorial contributions to music scholarships at Colgate University (https://alumni.colgate.edu.makeagift) or to St. Paul’s United Methodist Church, Ithaca, NY (http://stpaulsithaca.org/giving/).