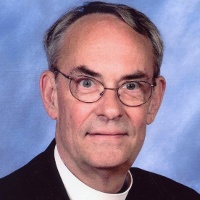 The Rev. Gordon Peers Ray, 77, of White Oak, passed away peacefully at home on Wednesday, August 7, 2019. He was born June 21, 1942 in Rockford, IL, and was the son of the late Peers Foster and Mary Elizabeth (Stocking) Ray. He was a 1960 graduate of East Rockford High School, 1964 University of Dubuque, IA, 1968 Lutheran School of Theology at Chicago, and was ordained in 1968 by the Illinois Synod of the LCA. In 1968, he began his ministry serving Gloria DCI Mission in Hagerstown, IN, followed by Leetsdale Wall Rose Parish in Leetsdale, St. Paul's Lutheran Church in Monessen, House of Prayer Lutheran church in Aliquippa, St. John Lutheran church, Carnegie, and Faith Lutheran Church in White Oak where he retired from in 2007. Pastor Gordon served several Interim including Associate Interim Pastor at First Lutheran Church, Pittsburgh. He was active in the Western PA and WV Synod and served on the Worship Committee. He was Chairman of Worship at Synod Conventions, Chairman of the Planning Committee for the Appalachian Mission, Secretary of the Lutheran Service Society of Western PA for 2 years, and Secretary for the Lutheran Student Association. He was a Pastor at Camp Lutherlyn, took youth to National Youth gatherings twice, and served on educational ministry workshops for several years. He was active in Symphony, Public Theater and Opera and sang in the Pittsburgh Compline Choir. He is survived by his wife of 56 years, Colleen B. (Brewster) Ray, son, Scott Gordon (Andee) Ray of Pekin, IL, grandchildren, Zachary, Andrew, Colton, Addison, Thaddeus, Spencer, Delanee and Elliot, great-grandson, Dawson, brother, Alan (Lydia Young) Ray and sister-in-law, Brenda Ray of Rockford, IL, nieces and nephews. He was preceded in death by his son, Todd Brewster Ray, and brother, Harold Ray. Friends are welcome Saturday, August 10, 2019 from 2-8 pm,  at the Gilbert Funeral Home and Crematory, Inc. 1638 Lincoln Way, White Oak. (412) 672-6322 Troy J. Gilbert, Director. Requiem Eucharist will be held in the First Lutheran Church, 615 Grant Street, Pittsburgh on Sunday August 11, 2019 at 4 pm. Bishop Kusserow  and The Rev.  Brian A. Evans will officiate. Inurnment will follow in the First Lutheran Church Columbarium. Memorial contributions may be made to the First Lutheran Church, 615 Grant Street, Pittsburgh, PA 15219. Condolences may be made at Gilbertfuneralhomeandcrematory.com