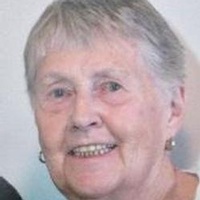 Born March 4, 1924, in Philadelphia, Pa., Betty attended Buchtel High School in Akron, Oh., before being graduated from Swarthmore College with a Bachelor of Arts degree in 1945 following an accelerated three-year program. She received her Master of Science in Counseling from Washington State College (now University) in 1949.

Married in 1949 to Holbrook Bunting, Jr., she raised five children while also holding several community positions as an educator and counselor.

Accomplished in many areas, she was at various times, a concert harpist, published author (Out of Wacca Wache, Bryan, 1978), docent (Winterthur Museum), genealogist, gardener, and in her final years, a painter.

Her genealogical research allowed her to discover her family ancestry, resulting in a much treasured acceptance into the Daughters of the American Revolution in her last year.

She joined the Willistown Meeting of the Society of Friends in 1999, and along with her husband, was an original resident of Maris Grove in Glen Mills, Pa., where she was active in choral and acting performances

To send a flower arrangement to the family of Elizabeth Jane Bressler Bunting, please click here to visit our Sympathy Store.