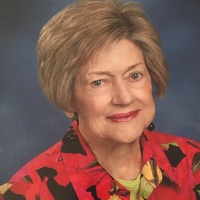 Doris was born August 13, 1929, to Steve and Elsie Brown in Rocksprings, Texas. She attended and graduated from the Rocksprings school district except for the one year she had to move to San Angelo due to gas rationing during World War 2.  Doris felt strongly about finishing school in Rocksprings so she left the ranch and boarded a room in town so she could finish.  She earned a Bachelor’s Degree of Home Economics from Southwestern University, Georgetown, Texas.  She would retell the stories of hitchhiking to and from school on holidays.

After dating seven years, she married Tommy Morriss on June 10, 1950, at the Rocksprings Methodist Church.  They were married for 58 years until his death.  Being his wife and nurturing a loving Christian home for their family was a passion where she flourished.

She and Tommy made their homes in the Davis Mountains of Balmorhea, Uvalde and lastly on the family ranch in Sonora.  No matter where she resided her first priority was finding a church home where her family would worship and where she could continue her life of Christian service.  Doris was a true home maker.  She welcomed any and all into her home and at her table.  There was always room for one more.  She was an excellent cook and hostess.  You were greeted with a beautiful smile and a “howdy do”.

Doris was gracious, pleasant, strong and busy.  She did not have idle hands.  She was involved in many organizations within her church and also in her communities.  Doris served as President of the Chamber of Commerce of Uvalde, Fund organizer for the Opera House in Uvalde, Women’s Auxiliary for the Hudspeth Memorial Hospital in Sonora, various sewing clubs, and was well known for her Bridge skills.  She was always working on some type of handiwork.

Memorials in Doris’s name may be made to the First United Methodist Church of Sonora or a charity of your choice.