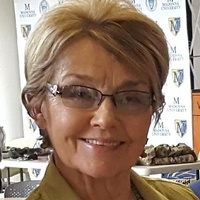 RENKOSKI, Ardis Wait, 84, beloved mother, grandmother, sister, aunt, and cherished friend to many, departed this life, peacefully surrounded by her loving and devoted daughters, on December 13, 2017, in Lansing, MI, after a courageous battle following an accident in June of this year.

Ardis was born on September 11, 1933 in Sandusky, MI to Grace and Norman Wait. A lifelong resident of Michigan, she graduated Michigan State University and was an ardent (if not fanatical) Spartan fan, and especially loved Spartan football.  In addition to raising four beautiful daughters, she enjoyed a career in Human Resources sourcing engineers for General Motors Corporation.  An avid reader, Ardis appreciated the arts, particularly local theater, the symphony, the ballet, and all things French.  She delighted in reading (especially The New Yorker), dining out, shopping, and spending time with family and friends, to whom she was uncompromisingly caring.

On May 24, 1990, Ardis’ second daughter, Paige, tragically went missing, and was never found. At that time, there were very few organizations or resources available to the families of the missing.  As a result, Ardis devoted the balance of her life to supporting those missing persons.  For 15 years, she served as the Leader and Program Coordinator for the Mid-Michigan Chapter of Parents’ of Murdered Children, Inc., was an active member of Missing in Michigan from its inception in 2010, and most recently served as administrator for the Michigan Cold Cases website.  Ardis was a speaker and invitee at numerous conferences and meetings, including The Department of Justice DNA National Strategy Conferences in Philadelphia and Sarasota, and at the annual Michigan Medical Examiners’ Conference.  She worked closely with the University of North Texas, and the NamUs program, and with Detective Sergeant Sarah Krebs of the Michigan State Police, and with Senator William VanRegenmorter’s office in passing the State of Michigan Crime Victims’ Rights Act.  In 2005, she was the recipient of the Senator William VanRegenmorter Crime Victims’ Advocate of the Year Award.  She has been a dedicated supporter of Ret. Chief of Police (Westland) Michael Frayer along with the Livingston County Sheriff’s Department Paige Renkoski Cold Case Team.  In 2015, Ardis was given the esteemed, and greatly-deserved, honor of being named the first Michigan State Police Missing in Michigan Advocate of the Year, an award that has subsequently been named the Ardis Renkoski Advocate of the Year Award.

Ardis will be immensely missed by all those whose lives she touched with her poise, elegance, and grace. Always gentle and kind, Ardis will be remembered for her passion for life, her supportive conversations and the insight, understanding, and wisdom that were uniquely hers.  The perseverance that she exhibited in the face of adversity provides a compelling lesson to us all, and will serve as her legacy through the decades.

The family would like to express its gratitude to the spinal cord injury rehabilitation specialists and medical professionals at Mary Free Bed in Grand Rapids, and to the medical professionals and staff at Sparrow Hospital and The Regency at Lansing West and Compassus, for their uncompromising care over the past six months.

In lieu of flowers, tributes in Ardis’ memory may be made to Missing in Michigan, P.O. Box 941, Union Lake, MI 49387.  https://paypal.me/missinginmichigan

Additional information is available at the Palmer Bush Funeral Home at www.palmerbush.com

“Pondering the joys we had, listen and keep very still. If the lowing from the hill or the tolling of a bell do not serve to break the spell, listen; you may be allowed to hear my laughter from a cloud.”