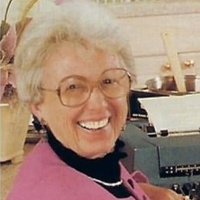 Katherine (Kay) Shaw Nelson died peacefully on June 20th in her home of more than sixty years outside of Washington, DC. She was 93.

A native of Lebanon, New Hampshire, Kay was a CIA intelligence officer and an American author on a variety of current and historical topics relating to food and travel. She wrote 21 books and hundreds of articles for national publications such as the Washington Post, Gourmet, Woman's Day, and Family Circle.

Kay graduated from Lebanon High School in 1944 where she was valedictorian. During high school, she wrote for the local newspaper and later was a reporter for the Manchester Union Leader.

She was one of the first Russian majors in the country at Syracuse University and was recruited into the Central Intelligence Agency which she joined as an analyst in 1948.

Beginning in 1951, she and her husband Wayne, (an Office of Strategic Services veteran and a CIA intelligence officer), spent many years abroad in the Middle East, the Far East, Europe, Africa, North and South America, and the Caribbean.

In 1997 she wrote an introduction entitled "How to Go from Spies to Pies: Operation Gastronomy" for the best-selling cookbook Spies, Black Ties, & Mango Pies: Stories and Recipes from CIA Families All Over the World.

Her 21st book was The Cloak and Dagger Cook: A CIA Memoir (Pelican Press). In the words of one reviewer, it is " an absolutely delightful account of a woman who, in 1948, joined the newly created CIA out of a yen for international travel. ... The result is a book that provides a great deal of entertaining reading as she recalls her life spent in the course of major events, extraordinary corners of the world, and the pursuit of everything that tastes really good."